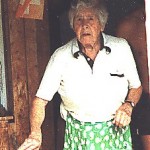 Lena, the former hostel owner and warden until Spring 1996.
Lena died in the Spring of 2002 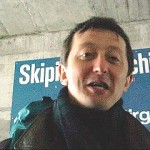 Lena and Marc on the hostel porch in 1992 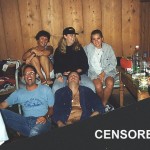 It was wild back then. Bottom left: the author and Ivan from Tasmania, former school teacher and latent exhibitionist.

Marc’s old mountain hostel logo. These T-shirts are a rarity now.
When Lena saw it, she said:
“Vhy didn’t you pick a nicer animal?” 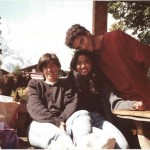 Gary Armstrong in 1991 “on the old hostel verandah, with a couple of ladies and a cat who we named “Clyde-Action”” 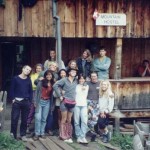 another photo for your Gimmelwald Old Days page. Once again from summer 1992.
take care

Gimmelwald, October 1983: Swiss Youth Hostel, one that was NOT full of screaming German school
kids, instead, it was full of travelers, tired of the German YH model (i.e., prototype for a concentration
camp!) and ready to party! Remember, hostels were all no drinking zones in those days. The inhabitants of the hostel soon coalesced into 2 distinct groups: the Americans, and the Commonwealth crowd, including Brits, Kiwis, Canucks, Aussies, and South Africans. We didn’t plan it that way, there was no overt hostility, but that is what happened. When we partied, the Americans left. When they partied, we did.
Partying on alternate nights may have something to do with it, as we were nursing hangovers when they were getting drunk, and vice versa, but there was more to it than that. Their parties looked boring to us, and I guess ours didn’t look like any fun to them.

I remember sitting in the sun on the porch, talking to the “Commonwealth crowd”, eating chocolate, and looking at the Jungfrau and the Eiger. I learned useful things about body language, and how the Canadian climate has affected ours.

I remember the people in the shops in Mürren weren’t very nice to us. Even if we wanted to buy something in the bakery, they wouldn’t let us in! Except for the folks at the grocery store. They were the best, friendly and helpful.

I remember I took a bunch of South African and Australian girls hiking up to the restaurant on top of the mountain near by. Good hike, but having to compete with the tourists who came up on the cable car for an overpriced plate of chips kind of detracted from the experience. I prefer our mountains, no cows, just mountain goats and marmots, and everyone at the top gets there the hard way. However, it was brilliant, when the girls saw a scrap of leftover snow in a shady place, as they had never seen it before! I showed them how to make snow angels, even though the crusty corn snow wasn’t the best for this.

That night, a whole crowd of us wound up at the store in Mürren all at once, buying food and beer. We decided we would put it all together, and have a really good time. We borrowed the crates to carry all the beer, and paid the cable car fare for 2 of the guys to haul all the food and beer back to Gimmelwald, where we made a huge, strange meal by putting everything we had, pasta, rice, lettuce, stew, chili, meat, spices, you name it, into a single pot and heating it until it was more or less cooked. After dinner, we got stuck into the serious part of the night, drinking beer and singing rugby songs. One by one, as they finished supper, the Americans left. When we began the rugby songs, they left fast! Except for this one couple, newly arrived on the mountain. We figured they were Americans, as they wore Levis, carried North Face packs, and hung out with them at supper, but they didn’t leave! Instead, they came over, sat down, borrowed a beer, and joined in the rude songs!! We couldn’t believe it, so we asked them where they came from. “Oh, we come from a place called Edmonton, in Canada. Have you ever heard of it?” We just about died laughing. No wonder we couldn’t get rid of them!

The next night, we were hung over, and the Americans were partying, so we went to the pub for a quiet beer. It was not to be, as there was a noisy group of locals there, one very drunk and yodeling. So, we sang rugby songs in English, to balance things out, and wound up with the yodeler at our table, doing a yodeling descant to a rude version of “Drunken Sailor”.

And that is what I remember of Gimmelwald, October, 1983. And this is possibly the best description of how Canadians and Americans are different. Hard to describe, but there is a difference!

I visited Gimmelwald in August 1992 intending to stay only a couple of days but ended up stopping at the hostel for over a month. This more than anything tells you how much I enjoyed being there. There are many things I remember about the place, for instance I was there when the laughing fly logo was designed and know the story behind it. I even bought one of the first batch of T-shirts, although try as I might, I can’t find it now.
There were also many warm summer days spent sunbathing nude by a secluded waterfall on the way to the glacier. I don’t know if anyone still does that but it would be sad to lose such a great tradition. Oh, and I also met Ivan the mad Tasmanian on his first visit that year.

I have to say that Gimmelwald will always occupy a place in my heart as the
most beautiful place on earth, and I am truly envious of anyone who can
visit there on a regular basis.

Lena was still running the hostel then and it was still in its “classic” condition. A few hot plates in the kitchen run by putting in a Swiss franc (although I remember one of them was free!!) and low ceilings throughout. The showers were a little sparse and I don’t remember too much hot water but all of this added to the rustic beauty of the place.

Very much enjoyed the site and thought I’d pass along my experiences from 1971. I was an American hitchhiker, running low on money, when I arrived at the hostel and met both Lina and her mother. The mother was a fabulous cook. Using the same basic ingredients, I don’t think she repeated a meal in the three weeks I was there.

I worked for room and board helping to bring in the hay harvest. I met Lina’s brother-in-law, Fritz, who badly cut his hand sharpening his scythe blade while cutting the hay. To this day the smell of freshly mown hay brings back memories of hauling haystacks into the barns.

Like Gary Armstrong, I too showered in the waterfall up at the head of the valley as the only shower available was in the school and cost 2 Francs. Don’t drink the water in that waterfall, there is a sheep meadow high above and I caught a Typhus infection from it.

Thanks for putting up this site. I really enjoyed seeing the improvements made at the Hostel.

The hostel was opened in 1939, by Lena’s mother. It used to be part of the Swiss youth hostel federation, but “left” the federation because it did not meet the standards. That was along time ago! The old YHA guide books still listed it in the 1980’s.

The new owners, a young couple, carried out major renovations in 1996.